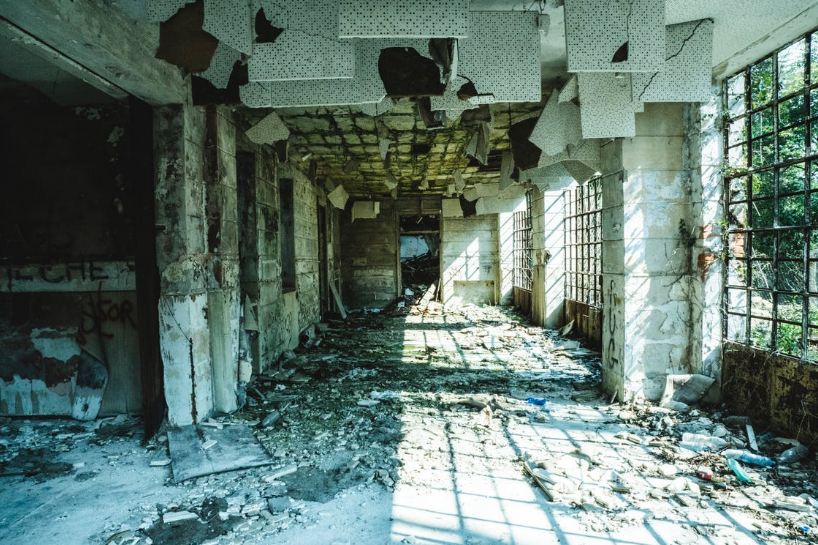 We humans have always been wired to wonder and think about certain things, most especially if it has a creepy backstory. We can all agree that there is probably at least one creepy place in your hometown, let alone the country. While there are still scary stories lingering around live places, the majority of those stories are hiding behind the walls of an abandoned site or structure. One place that isn’t so spooky is the Fort Worth Botanic Garden.

So, if you want to know more about some of the creepiest and spookiest stories of an abandoned place, you’re definitely in the right place. Just sit back, grab the popcorn, and turn off the lights.

These structures definitely look like they came out straight from a sci-fi movie. As true as it gets, it was the vision of the owner of these UFO-like buildings; to give a modern destination for incoming tourists. They made sure they were able to decorate this with a futuristic look. Unfortunately, before the resort couldn’t even be finished, a series of horrible events came into place. With events piling up, it also caused the owner a financial blow, leading towards the complete cancellation of the construction.

According to reports, several deaths occurred during the construction. Deaths were different. It ranged from construction accidents, car crashes and even suicides. Rumor has it that the main culprit of the tragic events is the Dutch graveyard under the site. Plus, they somewhat damaged a dragon sculpture that was said to be a symbol of luck for Asian culture. The site was completely demolished to the ground, leaving nothing but the dirt it used to be. But there are still reports about ghosts sightings in the area. They say those are the ghosts who died during the construction of the structure. Some say those are the lost ghosts of the old Dutch graveyard.

During the 19th century, this asylum was created on the bank of Seneca Lake. Willard Asylum was not that typical asylum you see in movies. Patients weren’t treated like animals; they don’t just simply put them in a straight jacket. Willard’s approach was quite different. They wanted to go to a much “moral treatment” for their patients, keeping everyone clean and well-fed. They had them do gardening and other simple tasks to let time pass by.

The idea was a complete success, up to the point that more than 50,000 people were recorded living there. Unfortunately, like any other place that wanted to treat severe illness, death is something they couldn’t simply avoid. You couldn’t say it’s their lack of compassion, no. It’s more about the patients not wanting to leave the place.

With tuberculosis and typhoid running wild during those times, most of the time, patients who arrived there never left. But the most creepy part about this abandoned asylum was not just the deaths. During the 90s, workers discovered at least 400 suitcases wrapped and labeled that were left in the attic. Families of unfortunate patients didn’t bother to claim them, and those suitcases only served as a spine-chilling time capsule for hundreds of forgotten lives.

This hotel sits right on the cliff, giving a spectacular view of the Bogota River in Columbia. With the sight to offer, this had been a tourist destination for wealthy travelers for a long time. But as pollution sets in, tourism drastically went down, causing the hotel to close down. It was left abandoned since then. The overlooking Tequendama falls one the best feature of the area. It was said to be an iconic site for Muisca Indians during the Spaniards. Indians chose to throw themselves off the falls to their death, rather than being a slave of the Spaniards. Eerie about this is after the hotel closed down, locals would often throw themselves off the cliff as well.

Every time scary and abandoned places are going to be brought up, abandoned hospitals will surely have the most chilling backstories, and for a good reason. This 19th-century hospital served as a hospital treating tuberculosis. During that time, the population is starting to skyrocket; thus, the community started to live closer and closer.

Tuberculosis rapidly became a major problem for them. As tuberculosis started to destroy the health system of Berlin, unfortunately, World War I started amid the ravaging disease. Wounded soldiers needed to be attended while Beelitz is close to being taken over. Through the course of World War I and World War II, Beelitz hospital became a military hospital treating soldiers and tuberculosis patients. The walls of this hospital have seen more deaths you’ll ever see in your life, hearing screams you could never imagine. Today, if you’ll ever plan to visit this worn-out hospital, you’ll be welcomed by foliage and ruins. The walls had been left out, along with the history written around it.

Four hundred eleven acres of land in New Jersey is left abandoned for years. The land was owned by Marlboro State Psychiatric Hospital. This hospital had been infamous for being a psychiatric hospital. Still true up to now, it was so badly managed that a state senator went undercover to investigate the alleged “inhumane treatment” being conducted there. A lot of irregularities were exposed during that time, including inhumane patient treatment, environmental destruction, and reports of deaths. It just got out of hand that patients were able to escape. A total of 151 mentally ill patients escaped. It’s the last place you’ll ever consider living nearby, trust us.

Once in a while, it’s nice to ponder and think about creepy backstories like this. Again, we are wired to feel the excitement with this kind of story, but hopefully, we won’t live and see another story to be remembered by the next generation. Let’s leave history as it is and continue living and feeling alive in the present.