Star Wars is one of the world’s most successful and highest-grossing movie franchises, with a global box office revenue of more than ten billion U.S. dollars. From the first Star Wars flick, it has branched into a number of stand-alone films, prequels, sequels, TV series, animated adaptations, and merchandise, bringing its earnings to trillions.

If you’re a Star Wars fan, you’ll probably know how simply big it is. But, what you may not be aware of is Luke Skywalker’s home planet – Tatooine – has its roots here on Earth. While visiting outer space is out of the question (unless you’re willing to pay the $58 million price tag), you can definitely visit the abandoned yet well-preserved real-world remnants of these stunning Star Wars movie locations. Where is it? Read on below to discover! 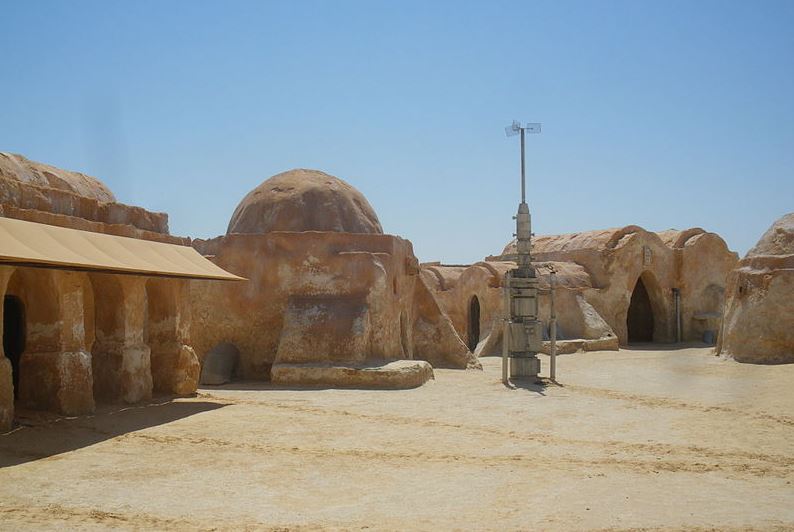 Tatooine is the harsh, dusty, desolate desert world, located in the Outer Rim, orbiting the twin suns. It was seen in the first Star Wars movie in 1977 and has been featured in over half of the movies in the film series. Inhabited by human settlers and strange creatures, the Tatooine desert, and its binary sunset is one of the most awe-inspiring shots from the saga.

Though few from the fictional planet Tatooine were filmed in the Death Valley in Eastern California, the majority of the scenes were taken in Tunisia. With its semi-arid locations and desert climate, the country has been the ideal double to be the planet of origin for one of Mark Hamill’s most iconic film characters – Luke Skywalker.

Creator George Lucas initially planned to make Tatooine a jungle-like planet, with the Philippines having already been scouted to be its location. Yet, it was decided to be a desert-brimmed realm. Filming for the movie started in 1976 in Tunisia in North Africa near the Sahara Desert. Various locations in the country have been used as settings, many of which are standing today and serving as one of Tunisia’s most popular tourist attractions. 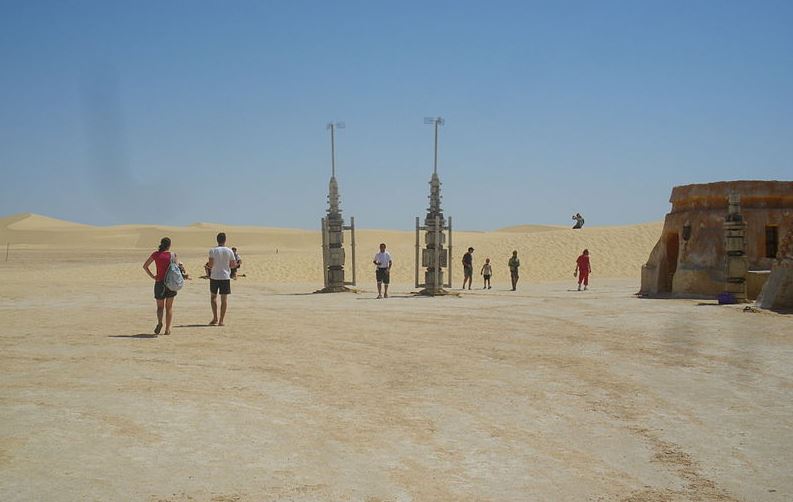 Though some of the Star Wars movie sets in Tunisia succumbed to the harsh conditions of the desert and have deteriorated over time, many of the original structures have endured such adversaries and are available for you to visit to recreate and feel the movie’s otherworldly atmosphere right here on Earth. Here are the best places to visit:

Ksar, or ksour in plural form, translates to fortified village or granary in the Berber language. These structures feature multi-storied vaulted rooms, which the semi-nomadic tribes carved in both hard and soft rock. Building them was brought by circumstances as invaders forced tribes to the hills. Having to construct these dwellings and storage for the first made resulted in the distinct shape of these ksour that served as their protection from invasion and the harsh weather.

Three ksour were used as Mos Espa slave quarters in Star Wars, namely Ksar Haddada, Ksar Oued Soltane, and the Ksar of Medenine. Some of the key shots in these locations were Anakin offering shelter to Queen Padme of Naboo and Jedi Master Qui-Gon Jinn, and Anakin freedom and bidding goodbye to Shmi, his mother.

Matmata is a small Berber town, which is home to many troglodyte dwellings or cave houses. These prehistoric underground homes were dug out and lived in, protecting them against the extreme summer and winter conditions in the arid desert. In Star Wars, these dwellings were utilized as the Lars Homestead his uncle and aunt raised Luke Skywalker. 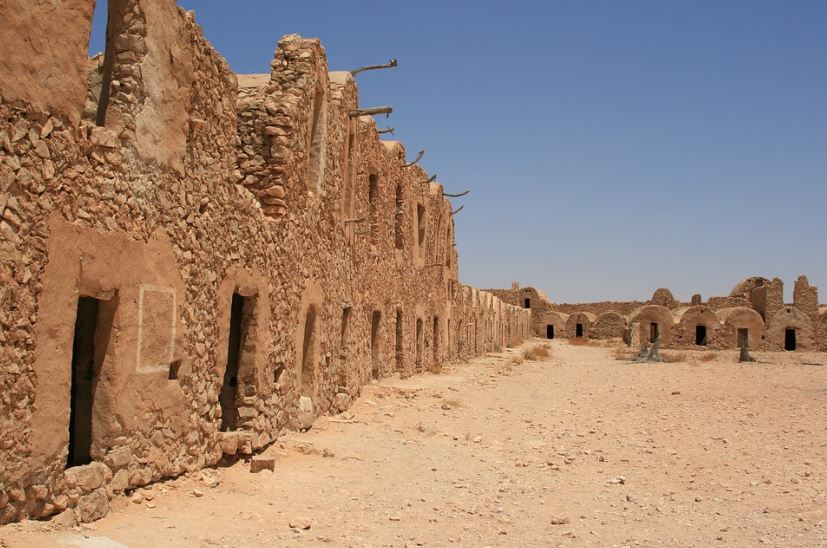 Though not abandoned as it has been transformed to Hotel Sidi Driss, it’s an affordable option to stay in, especially if you’re a Star Wars fanatic. The subterranean labyrinth has interconnected rooms and tunnels, where many of the original props used for the movie are still available for you to admire.

Nefta is a tiny oasis town nestled in southwestern Tunisia. It is where the iconic dome lies, which served as the entrance to Skywalker’s homestead. After being utilized in 1976 and serving its purpose, it was, however, left abandoned to decay in the desert.

As the need to reuse the dome arose in Star Wars: Episode II – Attack of the Clones, it was rebuilt in 2000 after more than two decades and a half of jilting. Upon the conclusion of the film, it was again left in the lurch of the desert’s jarring environs.

Luckily, several movie enthusiasts worked on providing the dome a new life as it was sympathetically rebuilt just several years later.  Reaching the dome is a huge challenge as it rests in one of the remotest parts of the world, situated about six miles or 10 kilometers from the town of Nefta, amidst the arid desert.

Tozeur is a desert city in southwest Tunisia, situated northwest of Chott el Djerid, an endorheic salt lake, the largest on the African continent. Visiting Tozeur will delight you to the extreme as it is brimmed with many Star Wars nearby.

Just a short drive from the oasis you’ll reach Onk Jemal in the Chott el-Gharsa salt flat. Here, you can see the abandoned set of the Mos Espa Spaceport. Familiar structures that have survived include the podracing area, spaceport gate, Sebulba’s cafe, and Watto’s shop. 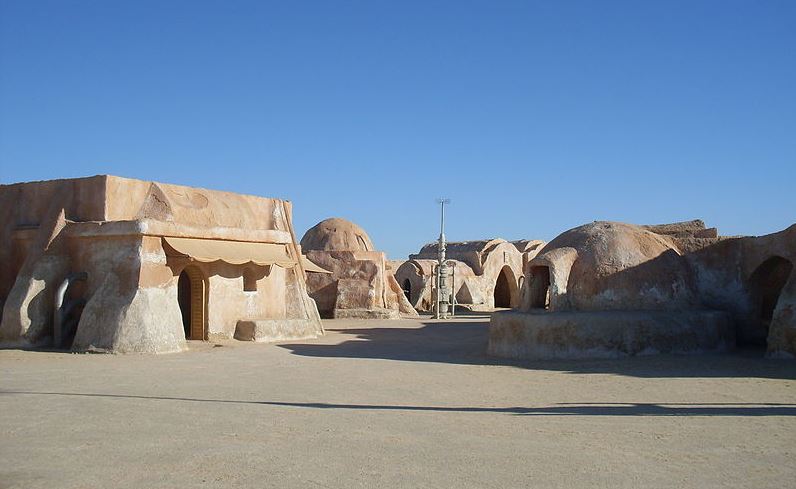 Meanwhile, the Jundland Wastes on the outskirts of Tozeur served as Sidi Bouhel or the “Star Wars Canyon” where several scenes from the original movie were taken, such as Jawas’ abduction of R2-D2, the Tusken Raiders’ attack on Luke Skywalker, and Obi-Wan Kenobi’s rescue to Luke Skywalker.

Other areas Star Wars fans will quickly recognize include Chott el Djerid, shown as Lars Homestead’s exterior, and the Yardang Field, the dramatic ridges that served as the setting for Qui Gon Jinn and Darth Maul’s duel.

Though most of the scenes from the Tatooine were shot in Tunisia’s desert, Djerba Island, a tropical paradise just off Tunisia’s southern coast also served as a key location for the film. It is where Obi-Wan’s house, Mos Eisley spaceport, and Mos Eisley cantina were located.

If you’re enticed to visit these jilted Star Wars movie sets, be wary that they’re situated pretty deep in the desert, which makes it pretty hard to find. For your safety, it’s best to join tours and hire a guide and 4×4 that will take you to these iconic locations. Once you’re there, be sure to follow all the rules in exploring abandoned places to avoid any mishaps and so you could get the most out of the experience.